Gretchen Phillips – I Was Just Comforting Her
2009 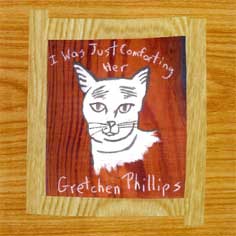 I needed to make a really big solo album. So I did. Rob Halverson and I had a blast utilizing every musical idea that we had and really taking our time on this baby. In this era of one song downloads, I’ve created a bit of an anomaly. This album is meant to be heard in its entirety, it has an emotional arc. Why don’t you try listening to it with headphones on while lying on your floor looking up at your disco ball/lava lamp/cat playing with some string/what have you?

Red State/Blue State
A song I wrote to help me deal with Bush’s re-election. It’s like a prayer or mantra that I repeat to myself to calm down. Surprisingly still resonant today, even with this change of administration.

Burning Inside
This one has appeared on a few recordings I’ve done before, but in slightly different forms.

Honey, I Feel So Good
Love reveals the cosmos to us.

Peola
One of my favorite songs I ever wrote. Maybe because Ann and I wrote it together? Pure casio/skiffle pop.

Your Drinking
One of those songs that simply had to be written. Despite the specificity, probably most people can relate.

Swimming
It gets really hot here in Austin, in more ways than one.

YOY?
Another mantra to help me remember.

In Case of Rapture
I do not think that it’s ok to make a mess of things and then just make your exit.

To The Lady C
I’m super in love. What can I say? She’s totally awesome.