Gretchen Phillips – Songs To Save Your Soul
1998 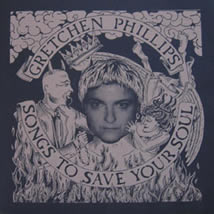 Arranged and produced by Gretchen Phillips and  Terri Lord.
Recorded by Terri Lord on 8-tracks at Shabby Road.
Mastered by Terra Nova.
Released in 1998.

This ep was released after I returned from living in San Francisco for awhile. I missed Texas, and surprisingly, country music more than I could have imagined. I created a companion piece to Welcome To My World, a yin to that one’s yang. Here is my press release for this CD:

A concept album that follows the journey of the soul from loss to redemption. The first two songs address loss and loneliness, the second two grapple with questions of morality and the material world, and the final two paint a picture of redemption through closeness and lesbian sex. Sure, it could be other forms of sex; it’s really open to your interpretation and proclivities. Phillips has undertaken this ambitious song-cycle of spiritual guidance after many years of introspection upon the demise of her ground-breaking lezzie-rock band, Two Nice Girls back in the early ’90s. Says Phillips about her hiatus from recording and touring, “I’ve really needed some time to reflect on the nature of fame and why I was driven to have people I don’t know know who I am. Why should I care? What’s really important in this life? What new do I have to say? By slowing down my pace and concentrating on how I feel in this moment, not living for some future, I’ve learned a tremendous amount that I want to share. My goal for Two Nice Girls was to enhance lesbian visibility. That job is by no means entirely over but I have a new agenda I want to push forward: Kindness is the real revolution!”