What can I say about Meat Joy? This was my first adult band. This was my first band to gig a lot and make a record and go on tour and get reviews. This was my first adult love. I loved everybody in this band with all my heart. The three girls were me, Jamie Spidle (formerly of The Buffalo Gals), and Mellissa Cobb (formerly of Stick Figures). I’d seen Mellissa and Jamie perform in their respective bands and it was such a thrill to me to get to play with them. The boys were Tim Mateer and John Perkins, (who goes by John Hawkes now, due to the fact that there’s already a John Perkins in SAG.) The boys were founding members of Big State Theatre and they went on to star in In The West, which was a response to those Richard Avedon photos that were just so patronizing, really. In The West was made into a movie called Deep In The Heart (Of Texas) that you can rent if you want to explore this tangent further.

Meat Joy was all about busting the fourth wall. We wanted everyone to do art, we wanted everyone to be creative. That’s still a cherished dream. Who knew what was going to happen at a Meat Joy show? We always began with some sort of improvisation and we always ended with a bunch of drumsticks and percussion instruments being handed out to the crowd. It was very important to me to release my first album before I was 21, and the Meat Joy album just squeaked under that timeline. We put this album out and then went on a tour of the Midwest. We had a blast, devouring Grain Belt beer and partying with the boys’ families in Alexandria, MN. I’ll never forget our show at The Blue Note in Columbus, OH. Our record had been out for two weeks and the college radio station had been playing it and the crowd was full of people I’d never seen before singing along to our songs. What a feeling! There’s nothing like that feeling, I tell you.

Meat Joy had a great trick with merchandise on that one and only tour. We sold our hand-decorated albums for $5 and our hand-decorated T-shirts for $5. There was pretty much always an after-party and at this party we would pull out our blank T-shirts and our RIT dye and paints and get the people of this town to make the Meat Joy shirts we would sell at our next town. Crafting is such a great way to party. Every shirt unique and hand made.
Unfortunately we had to break up. We swept up in the Austin Chronicle Music Poll for ’84-’85 and then had some stupid power struggles and broke up in the spring. It was sad. There has never been a band quite like Meat Joy since. It was a special time in music history, before the big labels discovered “indie” music. You just looked in the back of Maximum Rock & Roll and found out who put on shows in Lawrence, KS and hoped that that venue was still open when your van pulled up. Ahhh, to be 21 and in Meat Joy again. Except for the pimples. They were a bummer. 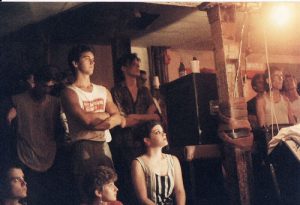 The Bag Dance – Soundtrack 1984
This is a soundtrack that we used for a piece starring garbage bags and a sheet that we sometimes opened our sets with.

Where Are We? (live) – The Twilight Room 1984
Here’s a rock song sung by John that we performed at Dallas’ glorious Twilight Room.

Better Heaven (live) – The Beach 19853
One of our very first songs, with the chords stolen from my pal Todd (I’ve forgotten his last name) and lyrical help from Amy Righter.

Time o’ Your Life (live) – The Beach 1985
Just another meditation on aging.

Flaming Youth (live) – The Beach 1985
This is an instrumental version of a Liz Gall classic.